When things really come down to the wire, the ones who love us most are often the first to put their lives on the line. In some cases, that form of devotion and protection can come from loved ones of the four-legged variety too, something 16-year-old Javier Mercado learned when his back was against the wall.

When armed intruders broke into his family’s Des Moines, Iowa, home back in February, Mercado had been home alone with Rex, his German shepherd. Then he heard something outside, and in a flash, things went from totally normal to completely disastrous. 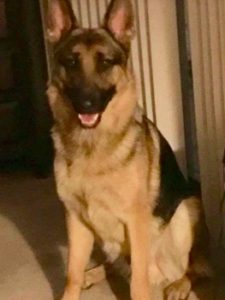 “I then heard the sliding door break, and it is made out of just glass so it shattered really loud,” he said. “My dog ran downstairs, and it just started barking and barking. I heard one guy scream, ‘the dog bit me, get the dog.'” The terrified teen dialed emergency services and hid in a nearby closet. 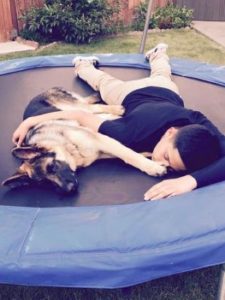 “Rex stormed back to the upstairs floor all beat up and bloody,” Javier’s aunt wrote following the break-in. “As [the burglars] entered the room where Javier was hiding in the closet, Rex came out with the little strength he had left in him and threw himself at them as he knew my nephew was in danger.” 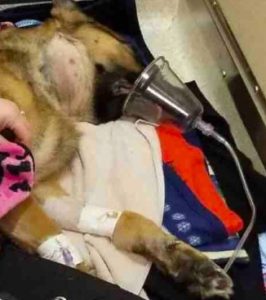 By the time Mercado came out from hiding an hour later, the intruders had left, scared off by police sirens. It was then that he learned Rex had been shot four times. As soon as he was able, he rushed the dog to the vet, fearing that he was about to lose his faithful friend forever. 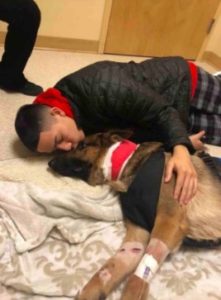 The most incredible part? The strong dog pulled through and survived. The road to recovery was a long and expensive one, but by some miracle, Rex found the strength to hang on. In fact, the good boy recently turned three and is back to leading a happy, normal life (although he’s a bit more famous now than he was before the incident). 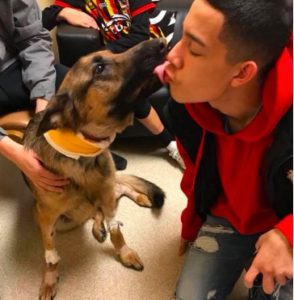 If you want to keep up with Rex, be sure to check him out on Facebook! Isn’t it incredible what our animals will do for us when we’re met with disaster? Share this story with the animal lovers in your life if it touched your heart.