While abandoned luggage at airports and train stations is often cause for alarm, one suitcase left behind at Ayr train station in Scotland left passersby feeling sad and dejected. Why? Because there was a Sharpei-mix tied to it and it was obvious that he’d been abandoned. The sad dog was clearly in a low place sitting next to his bowl, a pillow, and some toys. 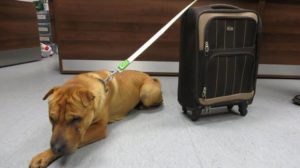 So here’s what happened. Do-gooders on the scene got the lovable pup out of there and took him to the vet. While there, he was scanned for a microchip, which led them to one man who said he’d sold him to someone else and had no idea that he’d been abandoned. Eventually, they used CCTV to find the woman who’d cruelly left him behind. Her excuse? He wasn’t the type of dog promised in the original owner’s listing. 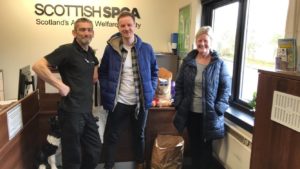 When his story made its way online, it touched hearts all around the world. The Glasgow SPCA reports getting dozens and dozens of calls from every corner of the globe inquiring about the adorable pooch. 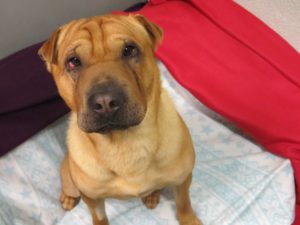 Before he could be adopted, though, he needed surgery to fix his eyelids that folded outward. The SPCA started a crowdfunding campaign and raised the money super quickly! 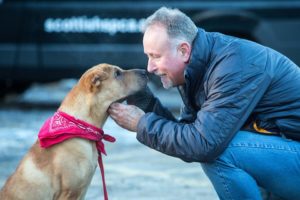 And then, at long last, he was ready for a forever home! Out of the many applicants who applied to take the nugget home, one man named Ian stood out. Ultimately, he was the one selected by the SPCA to give the dog a new lease on life. 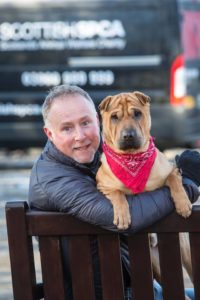 “He comes to work with me every day and has a wee face he pulls if he thinks I’m going out without him,” Ian said after adopting the pup, who he calls Kai. 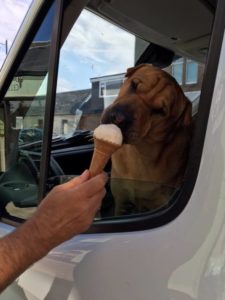 The two of them are basically inseparable now! What’s great is that Kai has inspired his new dad to get back into running, and these days, Ian’s putting his running shoes to work to raise money for the SPCA that brought his new BFF into his life. We’re so thrilled that Kai got the happy ending he always deserved! Share his story with all the animal lovers in your life.